Dear patients, Our practice is an approved provider for Pfizer and Astra Zeneca covid vaccine , You can make the booking online or call the practice .
Please note: We charge a gap of $ 15 for telephone consults over the weekends and public holidays. Thank you, GCMP
If you do not have a Medicare Card- please do not book with us for Covid Vaccine instead go to COVID-19 Vaccine Eligibility Checker to find the right clinic for you. 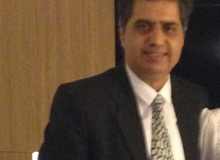 Dr Arvinder Joshi is the man behind coining the concept of Prime Medicals and Sehar Medical Trust. He is the one who is having a innate business sense and he has an exceptional pace of decision making. It is he who amalgamated the same minded entrepreneurs to give an implementable shape to his idea. As always innovative people needs implementors to implement their ideas thus there were three entrepreneurs who bolstered his idea and Prime Medicals was structured.

Dr. Arvinder Joshi by profession is a surgeon , in his 18 years of experience he has performed thousands of surgeries thus benefitting so many patients. He has extensively served in India and moved to Australia in 2011 and now in 2015 established a organisation Prime Medicals. With this he has embarked his journey as an entrepreneur.